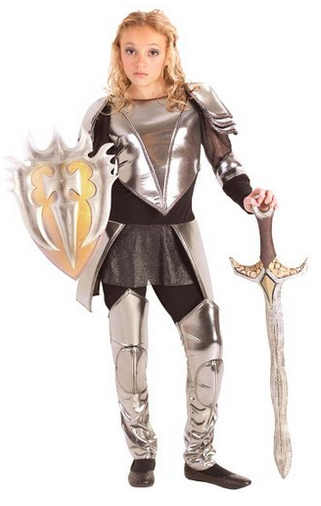 Fortunately today, girls can be anything they like, especially when it comes to dressing up. And – they can call themselves knights if they want to: Dame (the female equivalent of knight) just doesn’t have the same ring to it does it? If your daughter wants to turn into a knight, she will need to find a suitable girl’s knight armor!

Her First Costume Was Found in Her Big Brother’s Room! 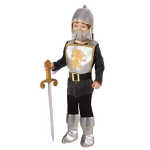 When my little girl was 2 she was in complete adoration of her older brother, she watched him all the time, cleverly mimics everything he did including play and speech, even the expressions he makes. Generally she wanted to do what he did, so it was no surprise that one day, when he was dressed up in his knight costume, she was totally fascinated. She wanted a costume. A Girl’s knight costume!

The next day, when he was in school, she managed to open the drawer where she knew the costume was. In her baby talk “put mommy put” she made me understand that she wanted to wear the costume. Since then she just wants to play knight in his costume. 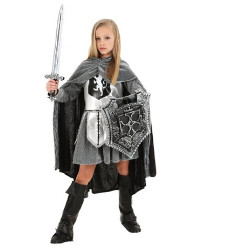 This shiny armor is available in sizes ranging from S to XL. Sword and shield NOT included (but you can buy the ones shown in the picture here: Crusader Sword & Shield)

The Search for Girl’s Knight Costumes

I wondered if it was time to look for one of her very own – surely she isn’t the only little girl who would prefer to be a knight rather than a princess –and this Girl’s knight costume page is the result. The short version is: yes your little girl can be a knight, but you might have to buy a little boy’s knight costume to dress her. Especially for toddlers and young girls Very few knight costumes are made with little girl’s in mind. 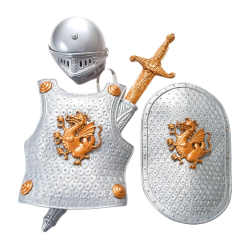 I often think young children can teach us so much. This young, they aren’t bound by any restraints society applies of what is or isn’t appropriate for a boy or a girl. They haven’t been conditioned into stereotyping roles yet and it is really refreshing. A little girl only sees the costume, sees that she can become someone who is brave and strong and capable of fighting evil. With a swirl of a cape or a flourish of a sword, she turns into a hero – or heroine anyway. She
can banish bad and defend good.

I suppose psychologists would try to find deeper meanings and maybe there is something to the thought that dressing up in a certain costume allows them the illusion of invincibility – gives them a way to face and conquer childhood fears. I prefer to think, they are smart cookies and they recognize something good when they see it.

Goodness knows history shows us there is no shortage of brave fighting women. Many like Joan of Arc and Boudica actually led troops into righteous battle but they weren’t granted the name of knight. In modern times we still admire ‘warrior women’, think of Xena to name just one. There is nothing wrong with a female who can defend herself and others. I’m not advocating violence here, but defending the philosophy of good triumphing against evil which is essentially what a medieval knight represents.

If your little one would love to be a heroic knight, which would you pick? Personally I would avoid the black knight costumes that are available and pick brighter colors like red and yellow. 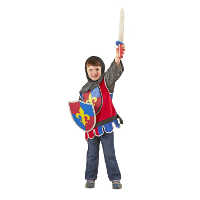 Buy Accessories To Go With These Girl’s Knight Costumes

Remember, most knight costumes are made for boys! You may need to pick a smaller size for your little girl or teenager! Also be aware that some costume are pictured with sword, shield and other accessories, but are NOT included. Always read the description if you buy online.

Foam Swords and Shields For Kids, 2 PackBuy on Amazon 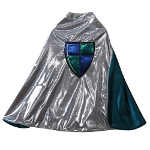 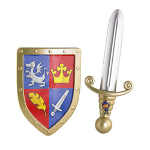 Mike The Knight Sword and Shield PlaysetBuy on Amazon 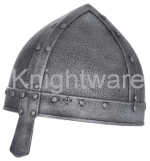