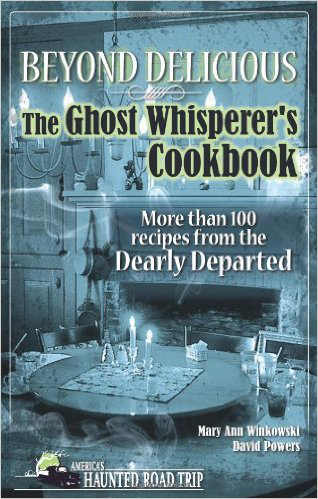 Recipes Collected From the Dearly Departed

Mary Ann Winkowski not only sees dead people, she talks to them and helps them cross over. And while that’s enough to make anyone sit up and take notice, she not only talks to dead people she trades recipes with them! Her recipes from the dead book is the result of years of paranormal investigating.

Mary Ann Winkowski is a paranormal investigator who often appears with James Van Praagh, from the popular television show, Beyond. And she’s also a consultant on the CBS show,The Ghost Whisperer. She’s also been a guest on numerous television and radio programs.

Like a lot of celebrities these days, Mary Ann has put together her own cookbook. But her book is an unusual collection of recipes – they all come from dead people. Ghosts. People who passed over years, decades, or even centuries ago. And apparently, they just can’t leave this realm until they reveal the secret ingredient in their Sweet Raisin Stuffing!

Beyond Delicious contains 100 recipes given to Mary Ann by 100 different ghosts. 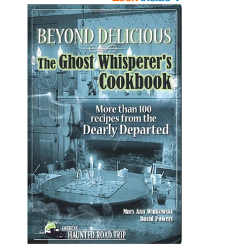 Beyond Delicious: The Ghost Whisperer’s Cookbook: More than 100 Recipes from the Dearly DepartedBuy on Amazon

The recipes in this book are real recipes – they just come from an unconventional source! And that’s what makes this book so entertaining! Each recipe is accompanied by a ghost story that sheds light on the history of how that recipe came to be included in the book.

You’ll meet Bess and dozens of other ghosts – some friendly and some… not so much. Some of these ghosts are bound to this earthly realm simply because of these recipes. All through their life they guarded a special recipe and when asked to share they’d always omit just one ingredient. Now they need to pass on the complete ingredient list so they can travel on into the Light.

Do These Recipes Really Come From Beyond The Grave?

Mary Ann has been seeing and speaking to ghosts since she was 4 years old. In the beginning she was accompanied by her grandmother, who had recognized her ability and wanted to help Mary Ann learn how to use her gift instead of fearing it. When she was younger, Mary Ann wasn’t really sure what she should do with the information she gleaned from the dearly departed. Especially when they shared their favorite recipes! So she started keeping a notebook of all her experiences.

One day, a woman named Eleanor contacted Mary Ann about a problem she was having with a ghost in her kitchen. When Mary Ann arrived, the house was filled with the delicious aroma of Nut Rolls. Eleanor was very proud of her Nut Rolls and baked them all the time. She passed them out as gifts to friends and neighbors and the members of her
Church. One of the members of the church was Bess, a woman who had recently passed away. And now, every time Eleanor tried to bake her Nut Rolls, strange things happened in her kitchen. The butter that she’d set out to soften would mysteriously find its way back into the refrigerator. The oven that she was pre-heating would be stone cold.
Ingredients would disappear from the cabinet.

So, Eleanor contacted Mary Ann to help her get to the root of the problem. When Mary Ann arrived, Eleanor had just taken a fresh pan of Nut Rolls out of the oven. And while they smelled absolutely wonderful, they looked completely inedible. And that’s when Bess piped up… “Those Nut Rolls might smell good, but they taste horrible! Eleanor can’t bake worth a tinker’s cuss!“

Bess went on to tell Mary Ann that nobody could stand Eleanor’s Nut Rolls and everybody just threw them away! Bess said that Eleanor was an excellent cook and that her meatloaf and chili were wonderful. But Eleanor was just a lousy baker. Could Mary Ann please tell Eleanor to stop trying to bake! Mary Ann didn’t want to pass on the message
because she knew it would hurt Eleanor’s feelings. So she and the ghost of Bess decided on the next best thing… Bess would share her Nut Roll recipe with Eleanor, if Mary Ann would be kind enough to write it down.The Nut Roll recipe that Bess gave to Mary Ann was the first of many.

Over the years Mary Ann has put together a huge collection of favorites. Her book, Beyond Delicious: The Ghost Whisperer’s Cookbook contains 100 recipes from ghosts along with the story of her contact with each of these dearly departed chefs.

What recipe would you come back from beyond to share?